In planning for IM Coeur d’Alene 70.3 I wrote a Facebook post that said, “I’ll be focusing on style. I’ll be rockin’ a bike from A-Squared Bikes and a sweet new CUORE of Switzerland kit.” I also decided to paint my nails Hot Pink Bikini to match my kit. Finally, there was a last minute decision to french braid my hair in pigtails, which I think boosted my confidence the most during the run leg. I had to pull out all the stops for my first pro race. I wasn’t going to be winning any money, but there was still an opportunity for a good photo if I could just keep my head from tilting awkwardly to the side while riding and my eyes off the sky while running.

Before I tell you about racing in the pro field, I need to share the downside. Getting an early start time for race day still didn’t shield me from the faster, dumber male amateurs. Not all male racers fall under this category but several do and here’s how you can tell them apart:

Now, back to my own race. I really enjoyed swimming in the pro field. It was nice to have one set of feet to try to stay on, instead of attempting to swim around others. I’m sad to say I lost the feet of two girls in front of me because I got my hand stuck by the buoy line for a stroke and couldn’t catch up again afterwards. I also felt very lost when we made a turn directly into the sun. Without hundreds of other people around me, I had to actually sight for the buoy myself. I briefly panicked. OOOH SHIT, I should have worn my tinted goggles. I could just wait for the other girls to pass me again. If I head completely off course I guess a SUP volunteer will yell at me… Then I squinted with one eye and managed to see a red blob in the distance with some splashes in front of me. I pushed on and came 5th out of the water.

Despite being on my new bike, the bike leg of the course wasn’t my favorite. I wasn’t confident in my abilities against the other pro women. I didn’t want to get a drafting penalty for trying to overtake someone and failing to successfully make the pass. To make matters worse, I watched the motorcycle come around another pro about 10 miles into the race. She was trying to pass a girl in front of her on a climb but was too slow in execution. She got a blue card and spent five minutes at the penalty tent later on the course.

My legs did come through on the run course. Kennett and his parents were cheering. Locals had music blasting out oldies songs from speakers on a few different corners. One father and his teenage daughter had garden hoses to spray down racers. I finished the run by egging on another male racer. Coming alongside him I joked, “Come on, where is your finishing kick??” Then I pulled a half foot in front. I chided him on a bit too early and he actually challenged me back, pulling several strides in front of me until the finishing carpet where we crossed neck and neck. In the process, both of us came roaring past another racer in the finishing meters. Look at the photos below to see what that (possibly) fast, dumb male thought of it. 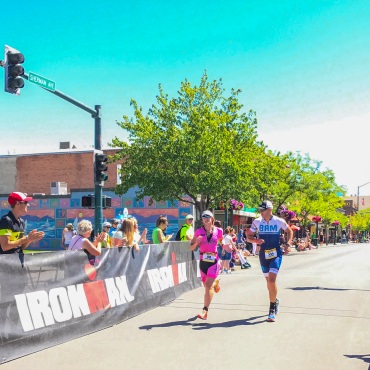 Thanks to Kennett’s parents and A-Squared for some amazing photos. It helped that they could always spot me coming around a corner thanks to my pink Cuore kit!