I initially learned about this race at the swim shop where I work part-time. I came home and searched online for the 140 West triathlon to no avail and then tried 160 West triathlon. Eventually I found it when I typed the right coordinates into Google. The highest triathlon in the world is the 106 West Triathlon in Dillon, Colorado and I was privileged enough to participate in the inaugural event.

I registered because I respected that the race directors were shaking up the normal, both by intentionally making a very difficult race and also, by giving away cowboy hats for registering along with a belt buckle for finishing. I gravitate to hard challenges which this race definitely was.

Normally I find race reports slightly boring to write and to read, but I have a feeling that there will be people looking to learn about the race before signing up next year, so I’ll share what I thought about the race. I did the half-distance so each leg of the race was 2 loops. It was a 1.2-mile swim, 56-mile bike, and 13.1-mile run.

I traveled to the race with my friend Kristen on Friday so we could get checked in. It was extremely nice that she had a condo nearby so that we could just walk to the transition and start area. If you are planning to race next year and you are traveling from out of town I’d recommend staying within walking distance. It also helped because we finished at different times, so after the race I went to grab a few things for the condo before cheering her on. The race meeting on Friday was my favorite I’ve been to so far. The organizers had a good sense of humor about the race which added to a fun atmosphere throughout the race prep and race day.

On race day, Saturday, the morning temperature was 37 degrees outside. When we walked to set up transition I could see my breath and my feet went numb in my flip-flops. However, once the sun came up, the temperatures quickly rose. I knew the water would be chilly so I bought a silicone cap to wear underneath my race cap. I was probably in the middle of the road in that regard. Some people had sleeveless wetsuits while others were in neoprene caps and booties. It was cold, but honestly, I think the silicone was warm enough for me. That being said, I was only in the water for 31 minutes. If you think it will take you significantly longer, you may want to invest in some neoprene. Kudos to the race directors for having wetsuit strippers because it is harder to take a wetsuit off with cold hands.

Continuing on the conversation of temperature, I wore an unzipped light-weight black vest and knit gloves on the bike. (Since the vest was black it soaked up the sun’s heat.) Before the climb I stuffed my gloves away and didn’t need them again. I easily could have put away the vest too but didn’t because my bike handling skills on the tri bike aren’t good enough to take off jackets while riding.

The bike course undulated for the first several miles of the course before heading up Montezuma. For those of you who have ridden in Boulder I would consider the climb to be comparable to the ride up to Jamestown with a few pitches that were more in line with climbing the lower half of Sunshine Canyon. Those happen to be two of my favorite climbs in Boulder so I was in luck. I didn’t race with a powermeter because that data would have been skewed with the elevation anyway. Similarly, I didn’t race others too much because I knew I couldn’t recover as easily if I overdid the pace. The bike course topped out at 10,200 feet. To me, the bike course felt like a longer training ride where there were a lot of other cyclists out enjoying the road at the same time. After the climb I picked up a lot of speed going down and part of the course just flew by so I never thought to myself, when will this end?? My average speed was 19.2 mph.

I did see one crash on the bike which reminded me of my crash because there was a car about to pull out when it happened. I’m not sure exactly what happened, but there were plenty of cops nearby. In fact, the police had the course well covered with cops and I felt very safe. One cop even had a cowbell to cheer us on.

I don’t think I can do justice in describing how beautiful the bike course was. The aspens were turning colors and it was phenomenal scenery. Unfortunately they didn’t have photographers on the course. Kristen and I both agreed we would have bought photos had they been taken and I’m not normally one to buy race photos.

I came in from the bike as one of the top females, but a few other females came into transition with me so I knew I had to get moving. Unlike my race in the spring when I missed 1st place because I spent too much time tying my shoes, I had bungee laces for the 106 West tri and managed probably my fastest transition ever in :54 seconds.

By the time I got to the run the wind had picked up. I lost a visor due to the wind along the dam. We were running on a bike path right which had plenty of space for everyone. It had one larger hill and few of really really short hills that still got to me. I got passed by one girl and passed another myself. I knew I was in the top five females but wasn’t entirely sure where I was. The course was out-and-back which theoretically meant I should be able to figure out my place but I couldn’t concentrate very well outside of what was going on internally. I really tried to hold back the first 3-5 miles but I still slowed down a bit.

The aid stations on the run were 1.5-half in and 3-miles in but there wasn’t an aid station near the turnaround for the 2nd loop which means we went around 4-miles without aid. I think they got a lot of feedback about that and will ensure another aid station for next year’s race. I made sure to choke down 3 gels throughout the run and got a few more calories through soda at aid stations.

My friend Kelly came out on her mountain bike and cheered me along the run which was a huge mental boost. At points my eyes were barely opened and I just wanted to walk like other racers I saw. As I crossed the finish they confirmed that I was the 3rd female overall. I sat down cross-legged while Kelly brought me some water. As she walked away my rib cage tightened and my lungs cramped so painfully that I just looked at another friend, Kenny, and groaned ow, ow, ow. I think if I hadn’t been pushing the pace to keep my 3rd place I may have saved my lungs a little of the pain.

I am extremely proud of my 3rd place. 1st place went to Laura Bennett is a professional triathlete who has been to the Olympics. 2nd place was a woman named Molly Smith. She and I came off the bike together but she crushed the run by putting 14 minutes into me.

My overall time was 5:21:51. I loved the race. It was amazing to share it with Kristen who also kicked butt after being worried about the temperature and elevation. 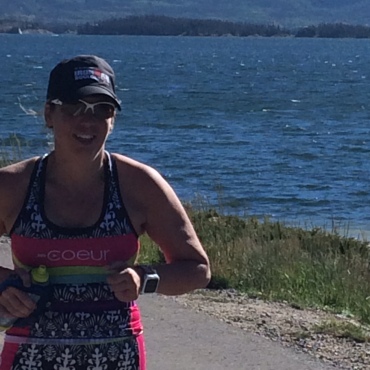 Kristin on the run

Kristen getting her belt buckle