I’m going to keep this blog short (at least I think so now). Kennett wrote a blog this weekend which always makes me want to say my piece, although our topics will be different so you should still read his.

First I want to share that I just signed up for a membership with Bicycle Colorado. Said membership is $30 but $50 or more and you receive a sweet pair of socks. I had planned to write an entire blog about what I am learning about the court system, advocacy, yadda yadda yadda. It is REALLY important stuff and I am always excited to share when I get the chance. Except for when my emotional tank is running on fumes, which it has been all weekend. So instead, I’ll share my emotional state and trust that you will also sign up to be a member of Bicycle Colorado (or a similar organization if you are reading from out of state). Bicycle Colorado works really hard to advocate for all cyclists: road, mountain, racers, and young kids with the cute flame helmets. Donate as little or as much as you’d like. 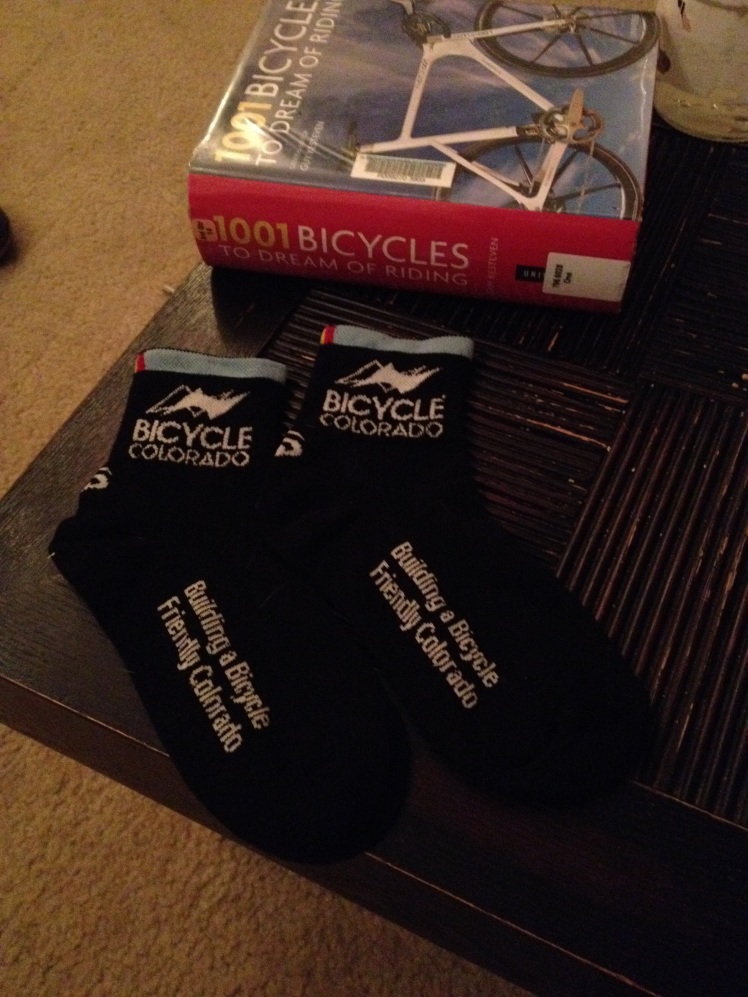 I’ll start with an “I’m lucky” statement. Crashing on Oct 18th allowed me to recover enough to enjoy Bike to Work Day. It was a beautiful, unusually warm winter morning with a great pink sunrise as we biked to meet my co-workers. Our office establishes a route ahead of time so we can fully reap the benefits of free food and riding bikes. It doesn’t get better than that.

Our second stop was Alfalfa’s Grocery Store and I ran into an old roommate from when I first moved to Boulder 5 years ago. I knew it was him but he had a beard which threw me. Not only did it change his appearance slightly but a small distinguishing scar near his lip was covered. The funny thing is – he probably went through the same process. Oh – it’s Adelaide. Or is it? It is…but she has a huge scar across her face. “Hey, long time no see!” Or maybe he knew before we encountered each other why my face was scarred. After all, my story did make its rounds.

This happens to me all the time in some way, shape, or form. A person asked Kennett at the gym what happened to me. Kennett started explaining and the guy immediately knew who I was because he had read about me in the newspaper. Or, on the flip side, when I walk in the gym, I wonder what narrative people are making up to explain my facial appearance and inability to lift a 1 lb weight to the side with my shoulder.

Similarly, a guy I met from the dog park says hello at Amante Coffee Shop. I have no idea who he is but I pretend to remember. Of course he’ll recognize me, I’m a one of a kind with a marking larger than Harry Potter’s down my face and neck without the same superpowers. Side note – wouldn’t it be awesome if I had a superpower to go along with my scar? I wonder what I’d choose.

My mom is really polite in telling me that it is in my head, that I’m imagining people staring. I don’t at ALL blame people for looking twice. My co-worker asked whether or not I’ve tried to hide my scars with makeup. I can hide them fairly well. I tried once. The fact of the matter is that I’m not going to spend extra effort trying to hide what happened.

That’s one way I get a reminder of what has happened. Another reminder came when Kennett went to the ER on Thursday night. Not too big of a deal but you can give him sympathy – everyone likes a little sympathy. He cut his finger on a stale bagel and so off we went so he could get a tetanus shot and 3 stitches. It was my first time back in the hospital since the crash. It wasn’t bad. I swear. I love the nurses and what they do. In a way, I think of the hospital as a safe zone the way you’d want a hug from your mom if something bad happened.

Technically that was my second time in an ER (different hospital) but only the first time I remember it. I compared–the bed looked different from the one I was in, the central area for the nurses looked the same, the nurses dressed similarly, both rooms had a TV, Kennett also got a red button to push in case he needed a nurse, there was no in-room toilet etc. The biggest actual difference: Kennett wasn’t in an intensive care room, he was in an ER room. I had been in one of those too – I just can’t tell you about it. Another unsettling part of not remembering those hours when I was in the ER is how I picture it. When I go back and imagine what I was like on the stretcher being rolled into the ER, I am a bystander watching it. Just like you see in the movies when the person dies but watches through a window as the rest of their world plays on without them.

Let me say this again, the ER wasn’t traumatizing, just emotionally a bit draining. And then it was followed by Friday’s plan of events. On Friday, Kennett and I went to support Jeff Wicks and his family in Ft. Collins. Jeff was hit by a driver while training for an Ironman in June. Similar to my situation except that the woman drove off, circled around a few minutes later, and drove past his body again, stopping a few miles later only to check the damage to her car. Listening to Jeff and his wife read their statements was saddening and all too relatable. Hearing her sentence passed down from the judge made me distraught. I drove home on Friday while Kennett rode home. I skipped my workout, ate chocolate, and unraveled into a large mess on the couch. I’m ready for that beach vacation Kennett and I were supposed to go on in November.

Acknowledging that, I am going to take a step back a bit this week with the exception of Tuesday. Tuesday I go to Denver to speak in support of House Bill 1035 (Victims’ Comp).  If passed, this bill will add Hit and Run and Careless Driving with Injury as crimes which will be compensable under Victim’s Compensation. The Colorado State Police are eager to get this change made and I’m happy to be able support it.  I’ll explain more on that at a later date. I don’t want to think too much about this all before bed.

As always – these posts are about the crash. Other news – Kennett will be coming back to work at SmartEtailing with me. My training for Vineman is slow but I’m making steps to get faster including a swim workout yesterday with Krista that left me feeling like I added 2 lb weights to each arm afterwards. And – when people realize I am not doing good they often switch to ask how our puppy Maybellene is doing. She’s doing great. She got a new dog bed and several new treats. Plus, we just finished a peanut butter jar which means tomorrow is looking up for her…and me. 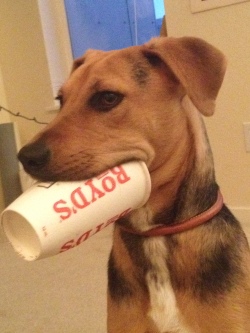