I came to Tucson for two reasons. To train hard and win races. Actually there was a third motivator – Kennett was coming. I didn’t want to miss out on time with him and be jealous of his training. I’ve been here since Friday night and here’s how it’s gone so far. 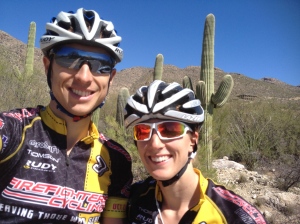 I flew out Friday night and my flight was delayed about an hour. How many flights actually take off on time? It is a pretty low percentage based on my experience. So, Kennett picked me up around midnight, we came back to the house where we are staying and built my bike. Needless to say, I didn’t get to bed until late and didn’t sleep because the bed had a funny feeling to it. Extra squishy. I was supposed to get up for the large Saturday group ride. Kennett had already decided to sleep in and somewhere between tossing and turning at 3am I decided not to go either. We slept in, ate pancakes and I rode about 12 miles up Mt. Lemmon – 4 hours total ride time.

Yesterday morning I woke up at a whopping 2:50am, which meant a second night of little sleep. Our friend Quinn and I drove 4.5 hours to get to a smaller road race in the sleepy old cowboy town of Hillside, New Mexico. Mind you, New Mexico does observe day light savings time and Arizona doesn’t. Sunday was the time change, hence the 2:50 wakeup alarm.

It also screwed with Quinn towards the end of the road trip. Quinn was obviously concerned about time. We switched drivers so he could go faster. He thought we were an hour short on time but I clarified and we got there in plenty of time to grab coffee for the local café. All of the customers were old men with cowboy hats and some pretty awesome handlebar mustaches.

I saw several people get flats during warm-ups and yet I felt slightly invincible…kind of like when I commute, forget that I am not invulnerable against the weather and end up freezing my ass, feet and fingers off. I lined up at the start line behind two categories and saw a white mark on my rear tire so I wiped it off. My tire started leaking. I ran to get another tube. I panicked. I am TERRIBLE at changing flats quickly. Luckily, Quinn’s teammate gave me one of their teammate’s extra wheel and we ran back up to the start. The women in my group were really nice and had already started to change my flat for me but I got the new wheel on before the start.

Once the race started I calmed down. Well, I still listened and felt my bike under me very carefully. I get super anxious of getting a flat while racing and for this race it was a legitimate concern. The course was lined with racers changing flats.

I had noticed a few girls had licked their GU blocks and stuck them to the frame of their bike. It didn’t save them any time because they quickly dropped off. They should have had a 2 shot caffeine GU to wake them up like I did! The front pack became 4 people and we worked together for most of the race. It was pretty easy and comfortable.

The race was 35 miles; out and back to town and then nine miles uphill.  On the uphill another girl dropped. It all ended when one girl (who earlier had asked if we were good sprinters –who asks that?!) said “I know I’ll see you girls at the finish but I want to let you know it was a pleasure to race with you.” I figured she’d take off but I guess she was just being nice like a proper cat 4 female. So, I said, “yea, it was”, got in my drops and sprinted. After about 10 seconds I saw the 1km to go sign and for the first time in the entire race I went hard. I won.

On the way home Quinn explained how New Mexico embraces its Hispanic culture while Arizona tries to fight it and names streets after old white men etc. We stopped for Mexican food in the state where the green chili sauce is a specialty.

Today Kennett had given me a workout but I ignored it and decided to follow him to Mt. Lemmon. Sometimes people wonder why I say Kennett trains me when I decide my workouts so often. It is a flexible day-to-day thing but most of the time I try to listen. Regardless, I tend to be self-motivated like Kennett and will ride hard even if I change my workout slightly.

The other great part of having a fast boyfriend is that I can motor pace (or bike pace) behind him like I did today on the way to Mt. Lemmon. By the time we hit the base of the ride we already had 17.5 miles under our belts and I made the decision to climb to the top, another 27 miles uphill.

Kennett went 8 miles up with me (he actually rested a bit today). He gave me extra water, extra food and some money. I made it up in less than 3 hours, which I felt great about. When Kennett and I first came to Tucson about a month ago he had described Mt. Lemmon to me, mostly the 27-mile bit, and ever since I have wanted to conquer it. Today was the perfect day in terms of temperature, food, and fresh legs.

Tomorrow we are going to change our workout again. Instead of an early group ride we are going to sleep in, take a sneak peak at the circuit race course for next weekend, and go sit in the sun at a coffee shop.

One thought on “New Mexico and Mt. Lemmon”