The week leading up to an event, my hypochondria tendencies become drastically intensified. I don’t touch door handles with my bare skin, if I hear someone coughing in the grocery store I’ll exit the area immediately, and I wash my hands every time after having human contact (meaning every time I venture outside the house). At the airport, traveling to a race, I wash my hands constantly, use hand sanitizer, and refuse to touch anything that I don’t have to. I’ll risk falling over on the DIA terminal train before even thinking about reaching out to steady myself with a railing. After the race is over, all of this changes. For example:

On the flight home from Oceanside, I put a chocolate bar (still wrapped) in my shoe to keep it off the ground after taking my shoes off on the plane. I took a piece out of the wrapper, still placed carefully in my shoe, every now and then. By the end of the flight I’d eaten the whole thing and threw out the wrapper. I went to put my shoe on when the plane landed and realized there was something loose in there. I shook out a loose piece of chocolate, which landed on the ground at my feet. I picked it up, and quickly contemplated the following:

I ate it after a two-second pause of contemplation. The build up to a race, especially the first of the year, takes a considerable mental stress toll, and getting everything right (or as much as you can) during that period is wearing. Once the race is over, a weight is lifted and being a normal(ish) person for a few days feels right.

Now onto the race.

The swim was the most chaotic I’ve experienced, which doesn’t say a lot since this was my 11th race (excluding two small local sprints). My level of inexperience constantly shows, as witnessed later in the bike leg, but back to the swim. The first 500 meters was just madness. I took a few blows to the head, gave out some of my own, swam over the backs of people, and had the same dished out to myself. At one point I had to stop for a second to put my goggles back on. Usually the madness like this only lasts for 200 meters. After 500 meters it let up and I found myself on the feet of a guy who seemed to be going hard at a pace I could follow, so I stayed on him for the rest of the swim. I came out in 26:46 and 28th out of the water, which, for me, was a decent time considering I was only a minute down on a big group and four minutes on the leader.

I went pretty hard for the first 12 miles of the bike, averaging 346, and found myself catching up to Justin Rossi, another ex-bike racer who I knew would be a good ally. He quickly bridged the gap to one more in front, Ronnie Shildknecht, and put in a very long, extended effort that almost dropped me. I struggled staying seven lengths back, constantly finding myself drifting back to 15 seconds behind the two. At one point I lost Shildknecht while eating. Focusing on maintaining that 7-8 bike length sweet spot was definitely a mental struggle throughout the bike for some reason.

Justin (with the two of us in tow) caught and passed more guys until there were about six of us, still just Justin working, by the time we came to the first of the hills. By this time I was finally feeling okay, and began taking some pulls. I was hesitant to go off on my own because I wanted Justin’s help on the flats and was worried that I’d get a lung cramp on the run if I dug too deep. I sat up a few times on the rollers throughout this middle section of the race to ensure that Justin, who had done a ton of work at this point, and the others weren’t dropped. I wondered at this point why my right hand was sore, and realized it was from smacking someone’s head during the swim.

By the last 20 miles it was just Justin, myself, and Shildknecht, who never took a single pull the entire time. Justin was rolling along pretty fast in the last 10 miles of the flat run in to T2, and I felt good about the progress we’d made until I looked at the results after the race. In hindsight, I wish I’d been less conservative on the bike and taken more pulls or as least attempted to go off on my own right as the hills started to bridge the gap to the main group up ahead, which at that point was only about two minutes.

Shildknecht came by Justin and I right as we entered T2, which felt like a big Fuck You, and it was. He took off on the run, fresh as a Chilean daisy from lack of working on the bike, and ran though most of the field to take 3rd. Justin and I exchanged a few disgruntled complaints running our bikes to the rack about that, then set to work on the most miserable part of triathlon. Peeing in your running shoes.

At least, that’s what I did, I won’t speak for Justin. After a quick pee, I got some trotting farts out of my gut. I was demo-ing a new Cuore of Switzerland race kit, which was super comfy and fast, but I’m not sure they’re going to want it back. With my intestines and bladder cleared out, I set to work. I kept my pace consistent and controlled throughout the whole run, never putting myself in the red until the last kilometer. At the turns I could see who was up the road in front of me, and knew that a big risky effort wouldn’t do much good. The gap was too big and most were only gaining time. I was also worried that if I dug super deep early on, I’d get a lung cramp or my hip would go out, two issues I dealt with in most of my races last year. Instead, I played it safe. 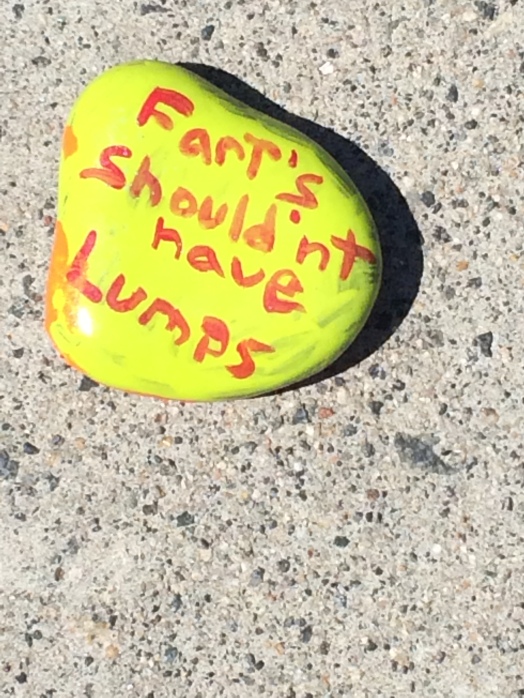 Adelaide and Krista found a painted rock by the race course.

I picked off a few guys as they blew up, moving to 9th by the second lap. Adelaide and her friend Krista (and Maybellene) were out there cheering, which helped me remember to keep perfect Craig Curly form, or do my best impersonation. PS if you don’t know who Craig Curly is, then shame on you. 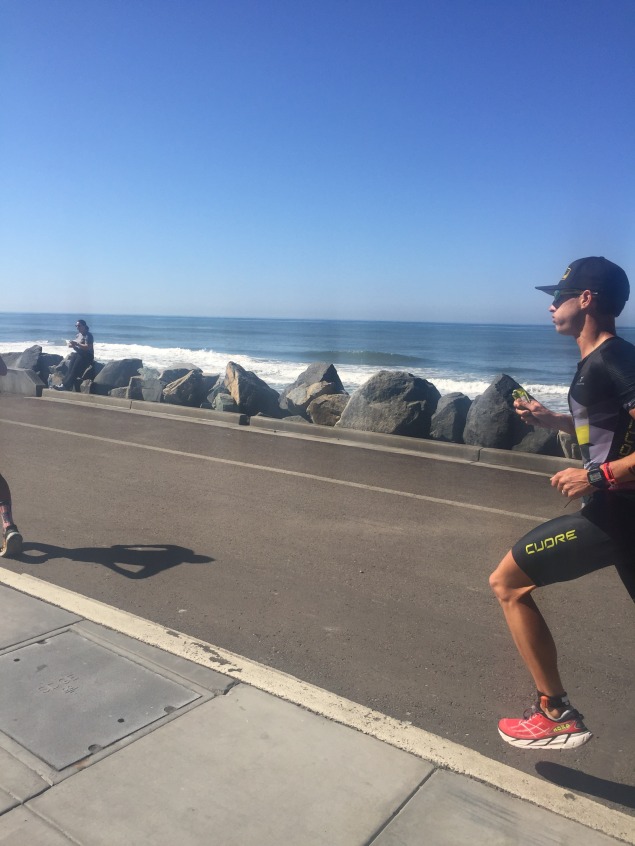 I came in at 4:01 something with a 1:16:33 run, 9th place, and about a minute behind 8th, which was the final place that got paid. 2nd place isn’t the first loser, 9th is. Speaking of 2nd, Chris Leiferman took 2nd, which was a huge result considering the size and depth of the field. Let it be known that I knew Chris back before he was a big deal. It’s sort of like seeing a band before they blow up. “Yeah, I used to hang out with the Pearl Jam crew back in 84.” That sort of thing. 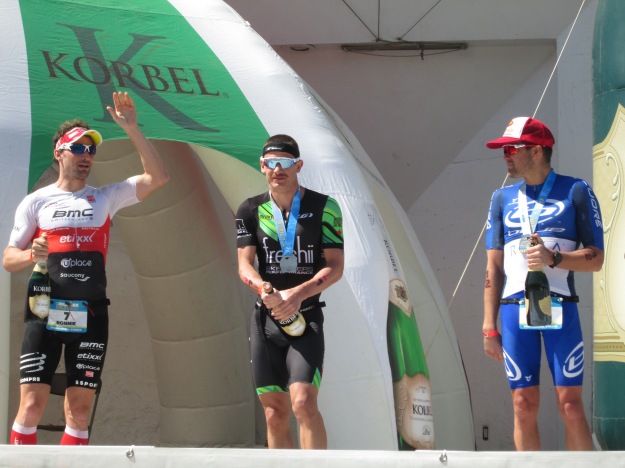 I wish I’d attempted a bigger effort on the bike to put myself within shooting range of the group up ahead. I had the 4th fastest bike, but it didn’t feel like my best effort. It was the first time I’ve really played it safe, and although 9th in this field was a good result, it left me wanting quite a bit. Next up is St. George. Thank you to my sponsors Cuore of Switzerland and Hammer for providing awesome support!

Ingredients for an awesome smoothie bowl. 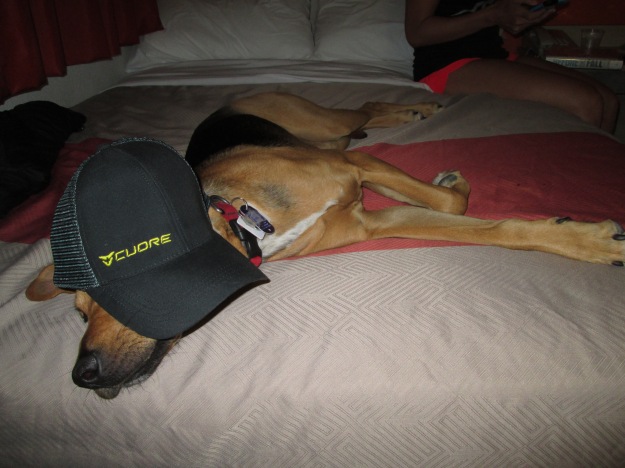 It was a long weekend of travel for some.